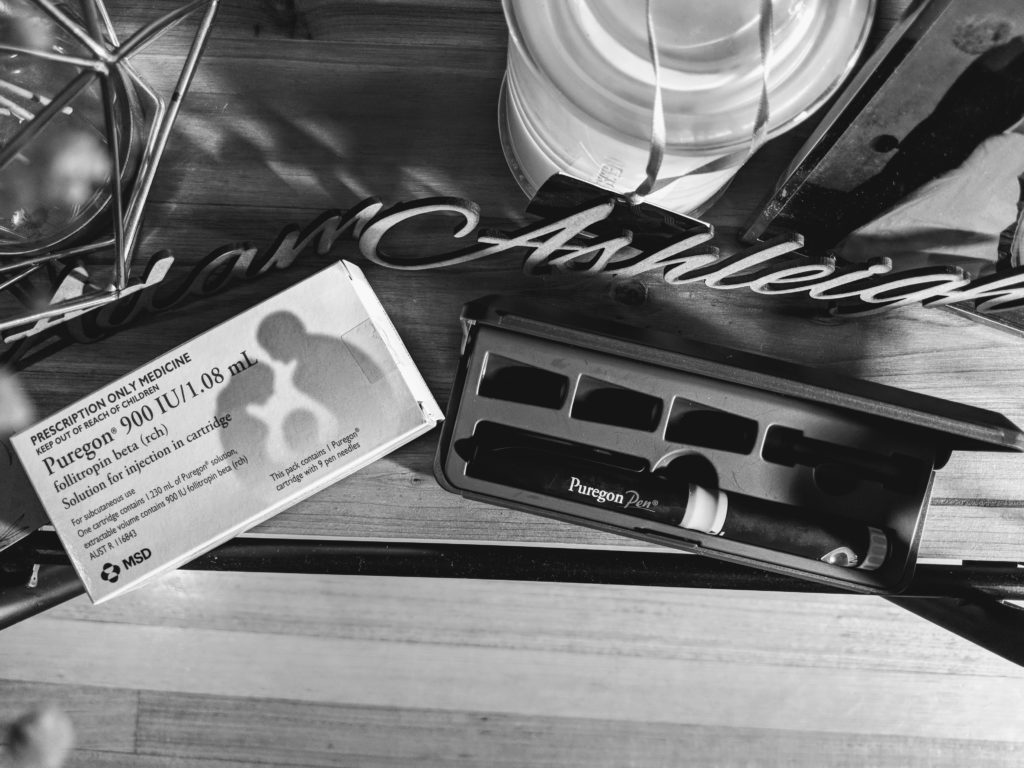 The process of IVF is completely different for every single person, depending on your diagnosis and how your body reacts to medications, etc. It’s really difficult for some, and not so much for others. But there is one thing we all have in common – we want to meet our babies so desperately.

It all started a few days after we arrived home from our USA holiday in late January. We headed to our IVF clinic to pick up all my drugs and have a ‘teach session’. Now I’m not too sure why they call it a ‘teach session’ they should really call it a ‘talk session’. The nurse talked us through the different needles, how to prep them, how to prep the injection site and how to administer the medication. I don’t know about others who have been through this, but because it’s such an emotional process, we found it so overwhelming on so many levels. By the time it came to start giving myself the injections, we had both forgotten everything, and were so scared of stuffing it up, we resorted to trusty YouTube to get visuals on how to do the injections. #LifeSaver

A lot of the IVF process just feels like waiting. Waiting 4 months for our initial consultaion, and then waiting for my period to start. Because we had been travelling and I was really jet lagged, my whole cycle was out of whack! At the first sign of bleeding you have to go into the clinic on either day 1 or day 2 of your cycle. Day 1 being the first full day of bleeding, so if your period starts later in the day, the following day is day 1. My clinic is closed on Sundays, so when I got my period Saturday morning, I knew I had to go in right away, even though it wasn’t very heavy at all. Because in my head, Monday would be day 3 and that would be too late. So I got my blood drawn and headed into work and then awaited a phone call from the nurse on what to do next. The results came back and my hormones hadn’t dropped low enough to be able to start my injections. I was devastated, it meant more waiting. My next blood test was scheduled for first thing Monday morning. I was so scared my hormones would drop too low, and that I would have to wait for my next cycle to try again. At 11:45am Monday morning, I got the phone call from one of the nurses saying the levels from my earlier morning blood test were perfect, and we were able to get started that night! I couldn’t believe it, we could finally start the process to make our babies! I called Adam and I burst into tears, it felt so surreal and I felt so overwhelmed with joy that something was starting to feel ‘right’ on this journey.

That evening I gave myself the first injection with a needle which is similar to an EpiPen. My medication, called Puregon, was set at quite a low dose. Because technically nothing is ‘wrong’ with me, I don’t need a massive hormone boost. In a way this is a blessing because my body doesn’t need to be massively stimulated, and side effects are therefore low.

Adam and I both felt it was important for me to give myself the first injection. For us it was symbolic being my first act as a mother, making a stand and doing something brave for our future children. It took me a good 5 minutes of holding the needle in front of my belly before I could do it. Adam counted me down from 3 several times before I had the courage. But I did it! And for 5 nights, I gave myself this injection, with Adam counting me down each time. The weird thing is, it never got easier, or felt easier. It always felt overwhelming. I guess for me it was the pressure of not wanting to screw up the entire process, because in IVF so much of it is performed by yourself and not by a medical professional.

My next blood test was the following Saturday morning, accompanied by an ultrasound to see how everything was progressing. And later that afternoon, we got the call to say it was all looking good, and to start my second injection called Orgalutran. Puregon was stimulating my egg production, and Orgalutran would prevent premature ovulation. The Orgalutran needle was a ‘normal’ needle with a prefilled syringe, but I only had to give myself half the dosage. So Adam took charge in giving me this injection. The first night didn’t go so well. Being his first time administering an injection, he was so nervous he didn’t stick the needle in with enough force and speed, so rather than piercing my skin cleanly it kind of just pushed against it until it finally broke through. It hurt, and it made me bleed. But there is no way I could have done it myself, so no matter how much it hurt, I am so grateful he was there to do it for me. And he got better at it from the next night onwards. I was taking both needles Saturday through to Tuesday evening. On Wednesday morning, I went in for another ultrasound and blood test to check on how my little eggs were going. And they were going well! Later that afternoon, I got a call from the nurses to say it was all a go! At exactly 8:30pm I had to take not one, but two trigger shots 38 hours before my egg retrieval surgery. The needles were similar to the other two injections I was already giving myself, one like a regular needle and the other was like the EpiPen. So we did a needle each – team effort!

Friday morning was surgery day. I woke up early with anticipation of what the day would hold. We headed to the clinic early for Adam to give his sample, and a few hours later we would head to hospital for my egg retrieval. The hours waiting felt long as my stomach rumbled, and I was pretty keen to get the surgery over and done with so I could eat. I wasn’t nervous about the operation. I was only nervous that it wouldn’t lead to the outcome we desired so much – our babies.

Surgery went well and they retrieved just the number of eggs our doctor was hoping for. I woke up feeling fine. I moved from the recovery bed to a room of reclining arm chairs where they let you wake up and have something to eat. The nurse offered me pain killers which I turned down because, on a scale of one to ten, my pain was at a one. This turned out to be a HUGE mistake! If you ever go through this and feel okay right after surgery, once you start moving and those muscles start contracting, you will feel it. When Adam came to pick me up, I went to the bathroom and we walked straight out to the car. The cramps started to hit me. Within five minutes of driving I was at an eight on the pain scale and he had to pull over because I thought I was going to throw up. Thankfully I didn’t. We called the clinic and they said to buy the strongest over-the-counter pain killers we could find (which isn’t much now you need a prescription for anything with codeine). So on the way home Adam bought what he could (Panadol Osteo!), but thankfully, when we got home we found some Panadeine Forte in our drug drawer. I took two of those and passed out for the next few hours.

The following morning we received a call from one of the scientists to let us know that 60% of our eggs had fertilised. This was the first positive result we’d had. There was always the question whether or not it was fertilisation itself that was the reason we had never fallen pregnant. Was fertilisation never actually occurring within my body? Did Adam’s sperm not know what to do with my eggs? So at least now we knew … there wasn’t an issue with fertilisation, and our babies were starting their journey into being.

We continued to get a phone call each day by one of the scientist to let us know how our embryos were going. On the Wednesday after egg retrival, 5DPO (5 days past ovulation / egg retrieval day), we did our ‘fresh transfer’ using our best looking embryo. We got to see our Little One up close on the microscope right before they were placed in their new home to snuggle down into. The appointment was quick and so surreal. Technically I was pregnant, or ‘PUPO’ – Pregnant Unless Proven Otherwise, or as we like to call it, Pregnant UNTIL Proven Otherwise. We were excited and overwhelmed and had no idea how to think or act, but one thing we were certain of was that God’s hand was all over us and our little embryo inside me.

If you follow me on Instagram, you’ll know that I’ve said over and over that this journey isn’t easy. But I am so grateful for the people around us praying for us, loving us, and for just being really incredible friends.

The next part of my story will be out very shortly. I won’t keep you waiting long – but speaking of long, that is what this post is becoming. Thank you for following along with my journey, and as always I hope this can help and encourage those going through something similar in life. We are not alone and are called to do life in community. So I hope you join this community in sharing hope and love through my infertility story.